People of the Clouds

Remember when sex was safe and flying was dangerous?

These are the words printed on the Men’s bathroom of 43 Air School in Port Alfred. Port Alfred is a South African coastal town situated between Port Elizabeth and East London, home to a choice school for professional pilots.

Pilots, I was soon to discover, are a special breed of professional. Balancing rigorous training, regimented lifestyles and relentless pressure, these men and women need to let go, unwind and de-stress. When they do, they sound something like this:

“They changed the SOP [Standard Operating Procedure] and I was like well fuck, this isn’t the way I learnt, but it’s fine. I’m on full approach for a crosswind landing. So I correct the plane for the crosswind, and the landing – listen, the landing was doof doof doof!”

The pilot recounts, slamming his hand on the wooden table, splashing his drink, reliving the moment,

“Could’ve been better. But at least the approach was stable.”

He takes a huge swig of what looks like brandy and then continues recounting his last flight, only to be interrupted by another pilot,

I find myself at The Wright Place, the pilots’ bar at 43, which you can only visit if accompanied by a cadet. Visitors must be out by 21:00 PM. But that is enough time to get a taste of the pilot’s downtime. I’m here visiting my brother (21-year old pilot) who is all too pleased to introduce me to his world. And right now, his world is dancing on the tables, collectively singing in perfect off-key unison,

“Don’t you worry, don’t you worry, child!” under a ceiling covered in dangling ties, each one representing a licensed solo flier who has had his tie snipped off as part of the ceremony. Strange folk, I think to myself.

The bar-counter and bar tables are made of plane wings, massive old propellers serve as décor, and all around me, a hundred thirsty pilots want their drinks immediately. The bar lady loses her cool and slams the bar counter, punctuating every syllable with her fists, screaming:

“I can’t get to everybody at the same time, please just calm down!”

There is one particularly tall, particularly charismatic Kenyan pilot that has conquered my attention. I am still pondering his appeal when he elegantly slides into the chair next to me and says in deep, measured timbre,

“From the minute you walked in here, I could tell that you find me so attractive,” he pauses,

“I just thought I’d sit down next to you here and tell you to relax – put you in your place and tell you not to worry. You’ll get your turn.”

Flawed, I have no response. And I’m not one who easily suffers a lack of words. Suddenly the appeal becomes clear to me: It’s the confidence. There’s a certain confidence about pilots. A confidence that comes with the ability to control an aircraft at 1000kmh, 41000ft off the ground. Self-doubt rolls off them like water. There’s no space for that kind of thing here.

Biceps, stylish, tall, flamboyant, ripped, smooth, suave guy next to me drinks his vodka clean in a plastic glass with a bottle of Sprite in his other hand, slugging the spirit, then chasing it down. He goes on to take my hand to his muscle-cut abdomen and touches my fingers to a tiny metallic ball on his chest. Nipple ring. Eight-pack. I get up to go and find my brother.

We proceed in my brother’s car to the two decent watering holes in Port Alfred. One is overwhelmingly White. The other is overwhelmingly ghetto. And, in true South African style, they are situated right next to each other: Guido’s (upper class, Pop-Rock and Dubstep) and Slots (lower class, House and R&B). Driving down the hill to the entrance, I am told that we are now at “4000ft altitude,” driving further down the hill, “3000 ft, 2000 ft altitude”, all the way down the hill to the club.

“Do you know what the most powerful jet engine in the world is?”

The pilot in the backseat points to his groin.

Eight ciders and three shots later, I am getting twerked on by a hot female pilot in training, except that unlike Miley Cyrus, she has an ass and the rhythm to carry it.

Hearing another pilot describe his flight through the Fish River Canyon – which he could quite literally fly into due to unrestricted airspace, I come to understand that I am dancing with people who have their offices in the clouds. And they have long abandoned the mundane.

As the pilots throw their inhibition to the wind, it occurs to me that I often entrust my life to these guys every time I travel. Like he’s read my mind, my brother says to me,

“It’s eight hours from bottle to throttle. See these guys in the cockpit and they’re completely different people. Focussed. Level. They have to let go of all that stress. That’s just the pilot’s life. Work hard but play just as hard.”

For pilots, this philosophy may be a perquisite of sanity. But one thing is for sure: They bring the party.

Model A: You look you so good.

Model B: No, you look so good.

Model A: No really, but you look good.

I’m in the front row of the Cosmopolitan Magazine Lingerie Fashion Show in Cape Town’s Canal Walk, trying to find a snippet of interesting conversation. This proves a challenge. The free booze is a piss-with-blood shade of red. A dash of Skyy Vodka (the sponsor) mixed with an energy drink that tastes like a poorly blended rip-off of Red Bull.

Actresses, models, artistic directors, photographers, musicians and comedians are in the mix. South African celebrities include Alex McGregor, Siv Ngesi and Jimmy Nevis. The crowd suffers a desperate collective need to impress. The long white catwalk before me is still bare. The long white catwalk of superior beauty beams bright. Holding my judgement in my throat like an avalanche of sick, I observe my fellow spectators:

‘She looked great by the way.’

The flamboyant dandy to my right strokes his carefully sculpted goatee.

A blonde sits stiff in her second skin jeans

‘Like when she walked in. Didn’t she just look great?’

The blonde hesitates to answer. Her face is covered in a layer of base so thick that if I even lightly scratched it I’d have a clump of powder beneath my nail.

Another pause from the blonde.

‘I want this to start already’

The dandy has no make-up on. His Prince of Persia features don’t need it. Thin skin over delicate cartilage, perfect complexion, no powered base needed here.

‘Yeah, me too. I wish it would start on time. Like it hasn’t for the last eight years.’

His delicate fingers curl around his pearly white iPhone. He checks the time. The blonde’s hand is firmly at her side, glued to her thigh.

‘I know, what was the last one – Victoria’s Secret? Remember how late that started?’

Her blonde hair falls into her face, picking up some of the excess powder.

‘Remember that year they were wearing tops and speedos?’

The dandy talks with his wrists, tiny wrists waving through the air. He speaks with a slant in his tongue, words slipping out like they’re not worth the motion of his mouth.

‘Yeah that was a little rough hey, I don’t think anyone should be wearing that.’

The blonde’s tone is nasal, disingenuous. She’s caught off-guard when the dandy launches in and asks her the million-dollar question,

His nimble fingers are still clutching and flipping his iPhone. She looks down at his hips, his thighs. His hips and thighs are narrower than hers. His question twists her stony features into a tight clench.

‘Well, you know, once you retire…’

She waves her hand in an over-exaggerated flick that fails to match the dandy’s effortless flamboyance. The smoke machine starts blasting clouds of opaque white onto the catwalk. He flutters his eyelids and gently swipes at his brow.

‘This is gonna hurt my eyes so much.’

‘See you after the show.’

Kiss–kiss, one on either cheek and he’s gone. The blonde was just a stop on his series of hug-hug kiss-kiss hey-dahling greetings. He repeats the same procedure on another six people in the front row.

I zone out and watch the line of starving giraffe-proportioned models walk, hypnotized by the flash at the end of the runway. As each long-legged beauty makes its way back and fourth, the crowd claps. I seem to have forgotten how to clap for people walking. 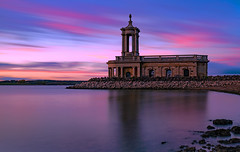 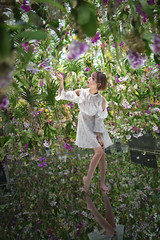 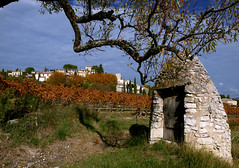